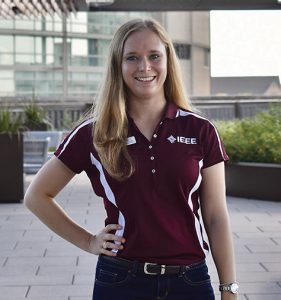 llinois ECE graduate student Megan Culler, advisee of Professor Peter Sauer, recently won the 2019 IEEE-USA Jim Watson Student Professional Awareness Achievement Award, recognizing IEEE members who volunteer to share their professional experiences with students and encourage active, lifelong IEEE membership. This award was established in 2011, but this is the first year that a student has been selected as the recipient.

Culler also received the IEEE Power and Energy Society (PES) Outstanding Student Scholarship Award for IEEE Region 4. This award is given to a graduate student who is pursuing a career in electric power and energy engineering and has demonstrated a high level of academic success, contributions to community and humanitarian needs, and leadership in advancing student engagement within PES. This is the first year of this award and she is the only recipient from the United States.

“It’s a huge honor to receive these awards because IEEE is such a large and prestigious organization in my field,” Culler said. “The 2019 IEEE-USA Jim Watson Student Professional Awareness Achievement Award means a lot to me because I’ve been involved as a student leader in IEEE for pretty much my full college career. I’m honored to be the first student to receive this award, and I think it speaks to all of the dedicated student leaders for IEEE that bring incredible programs to their campuses.” Among these has been the IEEE Power and Energy Conference at Illinois for which she served in registration in 2020 and as co-director in 2021.
Culler plans on graduating in May 2021 with her Master’s in Electrical Engineering with concentrations in power systems and cybersecurity. Following graduation, she will be working at the Idaho National Laboratory where she will use her background in power systems and cybersecurity to work on projects for power grid resiliency and security, with an emphasis on integrating distributed energy resources.

Excerpted from an article by Joseph Park in ECE Newsroom. Read more about Culler’s achievements on the IEEE USA https://insight.ieeeusa.org/articles/watson-award-recipient-megan-culler/#:~:text=With%20such%20stellar%20kudos%2C%20it%E2%80%99s%20clear%20that%20Megan,with%20students%2C%20to%20encourage%20active%2C%20lifelong%20IEEE%20membership.