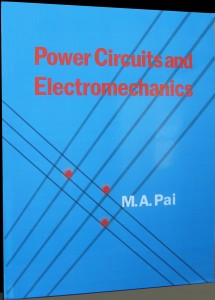 ECE 330 Text: Power Circuits and Electromechanics
In response to a change in the ECE curriculum in the 90’s, Prof. M. A. Pai taught the ECE 330 course in Power Circuits and Electromechanics and developed his notes in the form of a book published in 2002 with assistance from the CEME. ECE 330 has been popular with students over the years and several reprints of the book have appeared. Enrollment for this course, first put together and taught by Professor Peter Sauer in 1977 to 30 students, has grown ten-fold. By academic year 2014-15, enrollment had increased to 300.

The goal of ECE 330 Power Circuits and Electromechanics is to provide an introduction to three-phase circuits, transformers, and electromechanical systems with an emphasis on analysis and some design insight. The course begins with a review of phasors followed by three-phase power circuits, mutual inductance, magnetic circuits and transformers. Electomechanical systems are analyzed using energy balance concepts. An introduction to synchronous, induction, dc and small machines is given.

SolarBridge, Inc. Sold to SunPower Corporation
On November 10, 2014, SunPower Corporation, acquired SolarBridge a  company which began as a start-up led by Professor Philip Krein at the University of Illinois. SunPower now owns SolarBridge’s integrated factory-installed microinverter technology. These microinverters allow direct current generated by a single solar photovoltaic panel to be converted into alternating current and are guaranteed for 25 years.