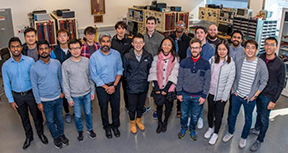 Professor Haran΄s research group. Joshua is fifth from left in the back row.

Joshua Feldman, a graduate student in Professor Kiruba Haran΄s research group, is currently working to solve a rather lofty problem… literally. They are addressing the uncertain outcome of airline travel in an envirocentric future by developing a superconducting motor with the help of cryogenics. The goal is to produce a fully superconducting motor with an output of roughly 2.5 MW.
The research is funded by the Cryogenic Hydrogen Energy Electric Transport Aircraft (CHEETA) NASA grant, a $6 million, three-year collaboration between the University of Illinois and several other research institutions, to design a fully electric concept airplane for commercial air travel and develop the technologies necessary for the plane΄s realization. Researchers comprise Boeing Research and Technology, General Electric Global Research, The Ohio State University, Massachusetts Institute of Technology, the University of Arkansas, the University of Dayton Research Institute and Rensselaer Polytechnic Institute. Along with Haran΄s group, with its superconducting propulsion motors, each of the teams is responsible for a different component of the plane including aerodynamics, fuel storage, electronics and power systems.
“Rising greenhouse gas emissions are worrying, the rise and volatility of fuel prices threatens the global economy by making air travel less economical, and noise from jet engines irritates local communities. These problems point to electric propulsion, using alternative fuels, as our solution,” said Feldman in an interview with Cold Facts. The proposed alternative fuel? Liquid hydrogen.
Challenges include minimizing the high ac losses produced by the stationary high-temperature superconducting coils and heat losses from the motor spinning at 3000 to 4500 RPM—up to 3000 to 4000 Watts of heat. Joshua is focused on the latter.
Excerpted from an article in Cold Facts, vol 35, no 6: https://cryogenicsociety.org/37366/news/securing_flights_clean_future_with_cryogenics_and_superconductivity/ Read more about Joshua΄s contribution in “Hydrogen-Based Cooling System for a Fully Superconducting Machine” (Motor Design Operation and Control Projects)