The 2016 U of I International Future Energy Challenge (IFEC) team of undergraduate researchers, including Grainger CEME Undergrad Research and Leadership awardee Carl Haken, participated in the year-long competition and won the Best Innovation Award at the final event held in July in Taipei, Taiwan. The team’s goal was to build an ac-dc power converter that inputs ac voltage and outputs 400 Volts dc with a greater than 96% conversion efficiency at 1.3 kW. The challenge was to make the converter compact and operate at 65 degrees Celsius. They used a novel circuit topology and digital control loop design never previously explored in this type of power converter. It allowed them to create a much smaller, yet more efficient design than a more conventional method would produce. Competition judges were impressed by the team’s presentation and in-depth understanding of the design. Applications include a more reliable and size-effective solution for data center power delivery architecture. 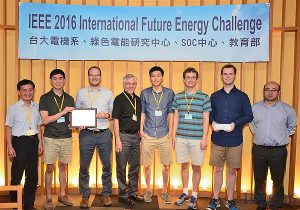 2016 IFEC team in Taiwan receiving the Best Innovation Award. Professor Pilawa is third from left, Professor Emeritus Krein is next to him, and Carl Haken is second from the right. Professor Krein was instrumental in founding the Future Energy Challenge in 2001, in partnership with the IEEE, the Department of Defense, and the National Association of State Energy Officials. The Grainger CEME sponsored the first University of Illinois team of five undergraduates.

The team was advised by Professor Robert Pilawa and his graduate students, Shibin Qin, Derek Chou, and Yutian Lee, assisted. Emeritus Professor Philip Krein, who was on hand to help hand out the awards, is a founder of the first Future Energy Challenge held in 2001. The U.S. Department of Energy, in partnership with the National Association of State Energy Officials, the Institute of Electrical and Electronics Engineers, the U. S. Department of Defense, and through Professor Krein, the Grainger CEME, organized the first Future Energy Challenge competition and subsequent International Future Energy Challenge events. This energy-based student-team design competition is held biannually.