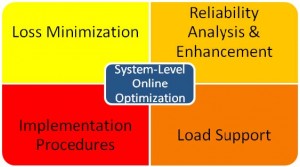 This research is divided into four main projects, shown in Figure 8, that result in an overall optimized field-oriented control (FOC) induction motor drive for different applications, including propulsion, electric and hybrid vehicles. Three optimization considerations are motor losses, drive reliability, and load support. The fourth is an implementation procedure of the optimized FOC drive.

Loss minimization was surveyed using offline and online techniques. Online minimization methods were categorized into model-based, physics-based, and hybrid, as shown in Figure 9. Model-based techniques depend on motor parameters and are sensitive to parameter variations; thus they do not guarantee minimum power losses but have fast convergence around the optimum. Physics-based techniques are independent of motor parameters where they perturb a control variable to minimize the motor input power. Even though they are insensitive to motor parameters, they bounce around the optimum; thus the system never goes to steady-state. Adaptive techniques have been developed to reduce this effect. Hybrid techniques show fast convergence and less parameter sensitivity than model-based techniques. Some can converge to the exact optimum, e.g., ripple correlation control (RCC). RCC application to input power minimization in induction motor drives has been an essential part of this project but with a significant complication: the ripple frequency needed by RCC is less than 10Hz and is not naturally available in an FOC drive. Thus, a compensator to solve this issue was designed and is being tested to operate RCC at higher ripple frequencies. 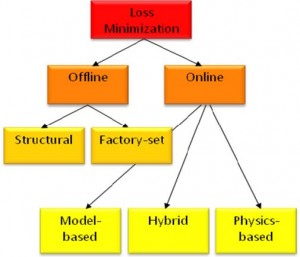 The second project, recently started, focuses on the reliability analysis and modeling of an FOC motor drive. Faults in the sensors and power electronics have been simulated and implemented and the resulting drive response is compared to performance bounds that are set for an electric vehicle application. The end result would be a complete reliability model of an FOC drive.

Once the first and second projects are completed, load support is the next step. Implementation procedures are being developed throughout the progress of the first and second projects and are intended to be used as references in future research or in industrial applications. These procedures already include the implementation of flux, torque, and power estimators on a digital signal processing platform, and will extend to include the implementation of sensorless speed control, loss minimization techniques, and an assembly procedure for a complete platform for motor control and other power electronics applications.

This research is supported by the Grainger Center of Electric Machines and Electromechanics, and the Office of Naval Research under Grant Number N00014-08-1-039.