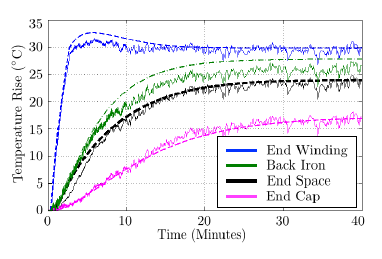 Past work has addressed the peak duty ratings of electric machines and control strategies to attain peak power until the maximum allowed temperature at the hot spot is reached. This research investigates control strategies to attain peak power after the maximum allowed temperature is reached. Conventional protection circuits turn off the drive or protect the motor after peak operation by reducing the current to rated. This protects the drive from overheating and avoids outages; however, the windings cool quickly because internal temperatures are still below rated, and then the entire machine slowly starts to heat and reach thermal steady state. These approaches imply that the machine thermal capacity is not utilized and overloading is permissible even after reaching maximum temperature. 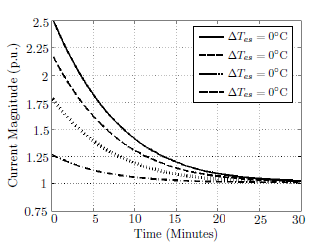 This research is supported by the Grainger Center for Electric Machinery and Electromechanics and Rolls Royce, account number 2012-05196.