Brett Robbins with adviser A. Domínguez-García

Power distribution systems commonly use tap-changing under-load transformers and switched capacitors to regulate voltage. Generally, the settings of these devices are automatically adjusted via automatic voltage regulators that react to local voltage measurements. This decentralized approach to voltage regulation is effective for voltage control, but it may not be optimal for overall system operation, e.g., it might not result in minimum network losses. Optimal device settings can be chosen by relying on point-to-point communications between the various regulation devices and a centralized processor; this decision-making problem is very much like the optimal power flow (OPF) problem that often arises in transmission networks. 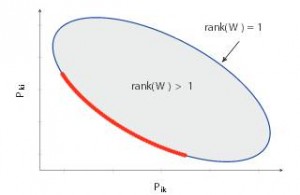 Our work tailors the OPF formulation to distribution networks to include the tap settings of distribution transformers as decision variables; this is crucial to enable optimal voltage regulation in distribution networks. Including transformer tap settings in the OPF formulation for transmission networks has been investigated for decades. For example, the transformer tap positions can be included as discrete variables in the OPF problem, which becomes a mixed-integer program. Unfortunately, the computational complexity of this formulation grows exponentially as the number of transformers increases, and thus becomes intractable for large systems. We cast this problem as a rank-constrained semi-definite program that can be solved using convex solvers by dropping the only non-convex rank-1 constraint. Figure 23 shows the relationship between the rank-1 solution and the relaxed problem. The solution to the minimization problem will be on the boundary and belong to both the convex and non-convex sets.

This research is supported by ABB.