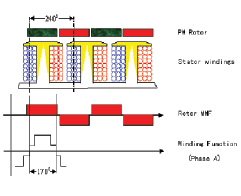 The project is to seek an optimized design of a large-diameter outer-rotor PM machine. We report three results for the project: a) the structural model of the surface PM outer-rotor machine, b) the finite element analysis method (FEAM) electromagnetic model, and c) analytic modeling and design by the winding-function approach.

This machine is built in the so-called inside-out structure—the stator is inside and the rotor outside the machine. Compared to a conventionally designed electric machine, the salient feature is its different number of stator (36) and rotor poles (48). The machine is designed as three-phase and the slot number per phase per pole is only 0.25, a fraction much smaller than unity.

Both FEAM and winding function approaches were used for design and evaluation. The FEAM results verify that, in the stator windings, three-phase symmetric flux linkages can be formed as functions of the rotor positions. Thus, three-phase back electromotive force (EMF) can be obtained.

For the analytical approach, see Figure 7 where the winding structure of the large diameter machine and related winding function is shown. All windings are concentrated and long-pitched, theoretically 240°. There are two main advantages of this type of winding: Concentrated windings are very easy to make and are suitable for mass production, and the end portion of the winding is much shortened, allowing effective copper utilization.

Through winding function analysis, however, the concentrated winding pitch is about 170°—much less than 240° and essentially short-pitched. The winding is also distributed close to a sine waveform. Furthermore, the second phase has the same winding function as that of the first one but with a phase shift of 240°. The last phase also has the same winding structure and winding function with an additional 240° phase shift. Using a winding function of the stator windings, we can calculate the self- and mutual-flux-linkages of the stator windings. Thereafter, back EMF of the windings can be found conveniently. From the above analysis and calculation, we found that the three phase windings form a set of symmetrical windings. It is interesting that the phase sequence of the winding is opposite the rotating direction. In other words, this type of machine will have an opposite rotating direction if the phases are excited with a normal sequence.

In summary, we have achieved a successful structure design and electromagnetic modeling of the large-diameter outer-rotor PM machine by both analytical and finite element methods. In our work we focused on machine performance evaluation for optimized design. By the winding function approach, it is observed that the actual winding distribution is slightly short-pitched and sine-wave shaped, as compared to the theoretically long-pitched ones. A minimum mutual coupling of the three-phase windings is also observed. The small fractional slot number per phase per pole has changed the phase sequence with respect to the normal rotating field direction.