Integrating microgrids into the bulk power grid has become an innovative and effective strategy for mitigating a variety of problems ranging from greenhouse gas emissions, power-grid resilience and reliability, to providing low-cost and uninterruptible power supply for mission-critical systems. One problem associated with this integration is achieving a resilient and fault-tolerant coordination of distributed energy resources (DERs) for ensuring proportional power sharing and maintaining the system frequency at its nominal value in lossy ac microgrids. Such coordination requires designing control systems robust to communication delays and random packet drops typical of communication networks deployed by the DERs. Novel algorithms in this area have been proposed.

Our work applies some of these algorithms to designing frequency controllers over time-varying communication networks with (i) bi-directional, and (ii) uni-directional communication links. The closed-loop system dynamics induced by these controllers solve a certain multi-agent optimization problem by executing two steps: (i) gradient-descent, and (ii) distributed averaging. Here, each DER locally estimates an optimal solution and then performs an estimate averaging with the neighboring DERs. For bi-directional communications, we consider the case when information exchange between neighboring nodes is not necessarily synchronized due to delays and packet drops. We propose a distributed scaled sub-gradient method with alternating averaging for solving the multi-agent optimization problem, which is further utilized to design the frequency controller. For the case of uni-directional communication links, we propose a frequency controller based on a sub-gradient-push method and mathematically prove its convergence.

The controllers were numerically tested using a lossy 9-bus microgrid, the topology of which is shown in Figure 6. From Figure 7, which shows the DER power outputs and frequencies for a directed communication network, it can be seen that when load perturbations occur, the DERs share the load proportionally to their corresponding droop coefficients. Also, frequencies converge to the nominal value regardless of the packet drops. Although our theoretical findings only guarantee asymptotic convergence, interestingly, the convergence in Figure 2 (page 11) is geometrically fast. Traditionally, primary and secondary frequency controllers are designed separately, assuming they operate on different time scales. In contrast, the proposed distributed-frequency controllers do not rely on a time-scale separation assumption. However, from Figure 7, we see that the proportional power-sharing among the DERs is achieved faster than the convergence of the frequencies to the nominal value, which is indicative of a time-scale separation phenomenon. This research is funded by DOE. 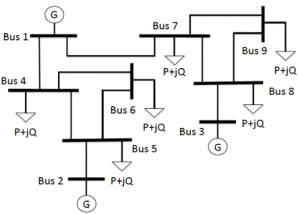 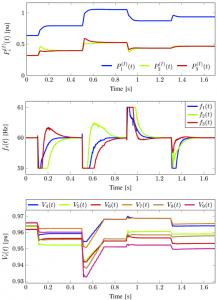