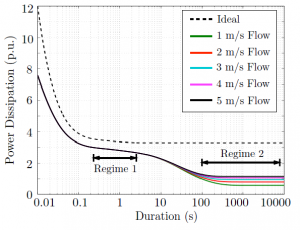 Electric machines have significant short-term capabilities and can provide up to five times their rated power for half a minute. Inverters have much faster thermal dynamics than electric machines and might not survive such overloads. In this research, inverter short-term dynamic capabilities are assessed and sizing trade-offs are analyzed for a peak-duty drive system design. The obtained short-term capabilities are represented as time ratings, which is the time it takes a cold inverter to reach maximum junction temperature under peak operation. Estimated time ratings presented in Fig. 6 show that these ratings can be divided into two distinct regimes. The time ratings in the first regime are completely decoupled from the inverter cooling performance and are limited by the i2t ratings of the power semiconductor junction area. The second regime corresponds to steady state and time ratings are strongly dependent on cooling. 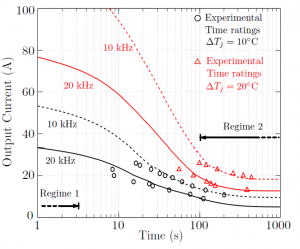 Figure 7: Experimental validations and the impact of reduced switching frequency on time ratings

These time rating estimates are experimentally validated. Results in Fig. 7 show that halving the switching frequency increased the time ratings by an order of magnitude. In principle, the switching frequency can be reduced to as low as the line frequency (six-step switching) during extreme peak power demands from the inverter. In this way, the short-term power density of the inverter can be maximized and the mismatch between the inverter and motor ratings for peak duty drives can be reduced compared to conventional designs, where inverters are significantly oversized to accommodate peak duty.

This research is supported by the Grainger Center for Electric Machinery and Electromechanics and Rolls Royce, account number 2012-05196.