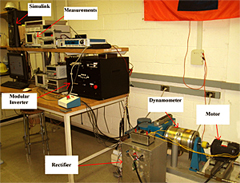 The system used in both tests (shown in Figure 4) is a 1.5 hp laboratory motor fed through the Advanced Power Applications Laboratory modular inverter, for which an indirect field oriented control (IFOC) method had been previously developed in Simulink. In the first test, input power was chosen to be minimized with respect to rotor flux. The convexity of the input power was demonstrated by simulation, hardware implementation, and frequency analysis. The simulation was done in Simulink and the frequency analysis in MATLAB. Figure 5 presents simulation and hardware results showing the input power convexity. RCC was expected to track the exact minimum, even though the minimum power point is located in a flat region. Through frequency analysis, we were able to verify that the minimum power point was at the same flux level as found from simulation and hardware. The optimum occurs when the phase of the system subject to a single flux value is n90o, where n is an odd number.

The second test was to determine a suitable ripple frequency. It included analyses of system sensitivity to errors in system parameters and measurements. First, a simple maximum power transfer problem in an ideal boost converter was analyzed by studying its frequency response. This served as an introduction to a complex induction motor operated under IFOC. For RCC applications to induction motors, sensitivity analyses show that accurate inductance values of the motor and accurate rotor flux estimates are needed. The flux estimator used in the simulation was sufficiently accurate for this purpose. A possible ripple frequency for RCC application was found to be around 10 rad/s. This is very low and not inherently available in the system. For simulation purposes, we injected a 1 Hz perturbation to the line voltage of the motor, and the optimum was successfully tracked.

Future work for hardware verification of RCC applications to induction motors includes finding a compensation method for using the 360Hz ripple frequency available from the input rectifier. System hardware implementation is in progress.

This work is supported through a Small Business Technology Transfer project grant from SmartSpark Energy Systems through the National Science Foundation.