Hot spotting, a common problem in photovoltaic (PV) panels, accelerates cell degradation and reduces system performance. When partial shading occurs on a string of PV cells, those shaded can become reverse biased. Over time, the reverse-biased cells heat up and can reach high temperatures that cause permanent degradation. A phenomenon called second breakdown, where current flow localizes around a dislocation or impurity in the cell and heats up only that small region to a high temperature, can also occur under reverse bias. This research examines the effects of reverse-bias conditions, including second breakdown, on the PV cell I-V characteristics. 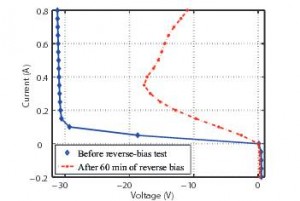 Figure 12: I-V curve of a PV cell before the reverse-bias test and after 60 minutes of experiencing second breakdown

For seven days, a one-hour reverse-bias endurance test was conducted on twelve mono-crystalline Si cells. Cells were reverse-biased at power levels of one to four times the maximum power point (MPP) rating. Changes in the I-V characteristics were observed during and after the endurance test. Second breakdown was observed in some cells that were reverse-biased at a power level greater than or equal to three times the MPP rating. When second breakdown occurred, localized heating drastically altered the I-V curve, as shown in Fig. 12. The infrared image of a cell experiencing second breakdown is shown in Fig. 13. The current flow and heat dissipation is concentrated in the lower left corner, which increases the localized cell temperature well above 100°F. After seven days of hour-long reverse-bias tests, results indicated that cells experiencing second breakdown were more likely to show permanent changes in their I-V characteristics. In these preliminary results, cells that were reverse-biased at or below a power level two times the MPP rating did not exhibit significant changes in I-V characteristics. Further comprehensive studies will be conducted to identify conditions that are likely to cause hot spotting in PV cells. 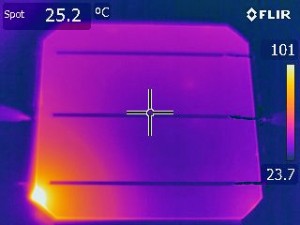 This research was supported by the Grainger Center for Electric Machinery and Electromechanics at the University of Illinois at Urbana-Champaign and the U.S. National Science Foundation through the Graduate Research Fellowship program. The information, data, or work presented herein was also funded in part by the Advanced Research Projects Agency-Energy (ARPA-E), U.S. Department of Energy, under Award Number DE-AR0000217.