Shibin Qin with adviser R. Pilawa-Podgurski
Single-phase grid-tied converters (single-phase ac to dc, or dc to single-phase ac) have wide applications in both energy harvesting (such as solar micro-inverters) and consumption (such as chargers for electric vehicles). Conventionally, a very bulky electrolytic capacitor is required in single-phase systems for power decoupling. This results in very large volume (low power density) and low system reliability.

We have developed an active decoupling technique to replace the bulky electrolytic capacitors with an active buffer circuit, which has much smaller volume for the same functionality. This technique also allows for the use of film or ceramic capacitors, a great reliability improvement over electrolytic capacitors, and includes both a unique circuit structure and advanced control techniques. We have built hardware (as shown in Figure 19) that achieves a record-breaking power density of 410 W/in3 while maintaining an efficiency above 99 percent (as shown in Figure 20). The achieved power density represents a 10x improvement over the state-of-the-art reported in the literature. This research is supported by Texas Instruments. 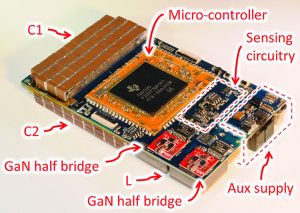 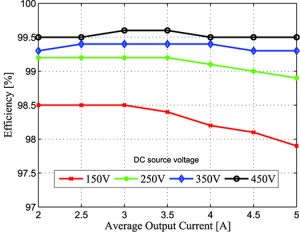