Over the course of a year our team has been rigorously developing a finite element model (FEM) of the armature windings to conduct a detailed analysis of ac losses, which are primarily due to proximity and skin effects. Analysis results were used to optimize the conductor geometry as well as the strand number to achieve the highest copper-fill factor per slot. Additionally, the FEM results were complemented by a series of bench tests to incorporate any manufacturing considerations before a detailed conductor design was finalized. These bench tests included various end-winding geometries to understand the variability and manufacturing methods of Litz wire. One result is shown in Fig. 1.

Lastly, for the purpose of verifying the FEM ac loss calculation, we set up a secondary test bench to experimentally measure electric losses on a smaller topology by using a ferromagnetic E-core as the flux carrying structure. Since these losses were expected to be small, the team decided to utilize indirect caliometry to relate a temperature difference to a given power loss, as shown in Fig. 2. This experiment is ongoing, and future work will be focused on matching these results with the FEM calculations to achieve agreement between the experiment and the numerical model. This research is funded by the NASA Fixed Wing Project and the Grainger Center for Electric Machinery and Electromechanics. 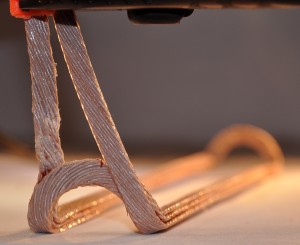 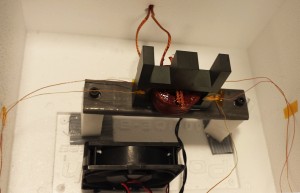