A solar-powered, energy efficient home has been completed by students at the University of Illinois for the 2011 Solar Decathlon Competition. The 2011 competition will be the fifth Solar Decathlon since the Department of Energy held the inaugural event in 2002. The Solar Decathlon challenges 20 collegiate teams to design and build energy efficient homes that are powered primarily through solar energy yet remain cost effective and appealing. Once built, teams must transport their houses to the competition site and participate in several events that simulate living in the home. 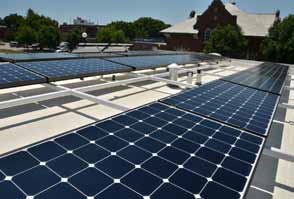 The University of Illinois is no stranger to the Solar Decathlon, successfully competing in 2007 and 2009 where the houses placed 9th and 2nd, respectively. For 2011, students are putting the final touches on a new home called “Re_home” that they hope will build on the strengths of previous homes. The that are all too common in the Midwest: tornadoes. The house is divided into two modules that can fit on a single truck and can be quickly assembled soon after a disaster strikes as illustrated in Figure 28.

In addition to being quickly deployable, the house is designed to be extremely energy efficient with super insulated walls, integrated shades that reduce heat gain during the summer months and LED lighting throughout. A 7.2 kW photovoltaic array on the roof (Figure 29) and integrated solar shades will provide most of the energy the home needs throughout the year.

This project was supported by the Grainger Center for Electric Machinery and Electromagnetics.