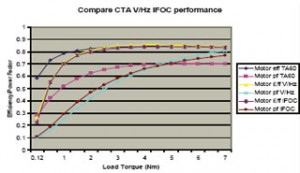 In previous work, a torque-angle-based analysis and control method for the induction machine was proposed and simulated. A hardware platform based on inverter technology and fast-prototyping DSP software was set up and tested. The constant-torque-angle (CTA) controller proposed by Guoliang Zhang with his adviser P. T. Krein was tested on this platform for both steady-state and dynamic performances. 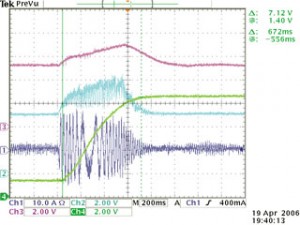 Compared to traditional fixed-flux-level controllers such as V/Hz control or field-oriented- control (FOC), the CTA is a variable flux amplitude controller with good dynamic capability. It automatically adjusts the machine flux level according to the load in order to maintain near-optimal efficiency and other performance indices during steady-state operation. With the CTA controller, machine efficiency and power factor are better than with fixed-flux-level controllers, especially under a lower load (Figure 8). Dynamic performance is also satisfying. Figure 9 shows a speed reversal from -1740 rpm to +1740 rpm. This process takes less than 0.7 s—comparable to the FOC controller.

The CTA controller is a promising alternative to the fixed-flux-level induction machine controllers in applications that require both high efficiency and fast dynamics, such as in traction control applications and others.