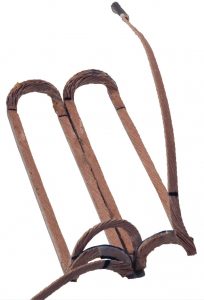 This project, funded by NASA Glen, is to develop a permanent magnet synchronous machine (PMSM) capable of significantly increasing power density. The goal is to enable electric propulsion in future hybrid and fully electric aircraft. My research has focused on the manufacturing and qualification of form-wound air-gap armature windings, as shown in Figure 9. The motor utilizes air-gap windings to eliminate iron teeth on the stator back yoke, thereby reducing iron losses incurred at high frequency. Electrical loss, dielectric, thermal, and mechanical capabilities are being evaluated. My responsibility has been to develop an optimal windings design that addresses each of these considerations.

Litz wire was selected to reduce ac losses caused by proximity and eddy-current effects. The copper fill factor within this wire was maximized to reduce dc losses. A design process was implemented to manufacture the windings as series pairs, thus significantly reducing the number of solder connections. These connection regions were points of substantial energy loss and heat, because the litz wire topology was absent. Then, an insulation scheme was selected to include strand, bundle, and turn insulation by producing several prototype windings. Different types of Class H insulators were evaluated, as well as placement locations of the turn insulation utilized in these prototypes. Impulse and high-potential tests were used to qualify each winding’s insulation. Insulation placement and resin penetration within the wire’s bundles plays an important role in electrical short prevention and adequate heat dissipation. Various resins and curing methods were tested to determine the combination that minimizes air voids within the windings while maximizing thermal conductivity. These thermal capabilities were tested by applying rated current to the windings and collecting data from thermal couples.

Strict dimensional tolerances must also be met. The department’s machine shop personnel worked to improve the fixture used to form the windings’ dimensions. When the windings experienced shear stress during operation, a bench test was implemented to evaluate the shear stress that windings can endure in wire-to-wire and wire-to-stator back yoke interfaces. These experiences have provided in-depth insight into electric machine design and manufacturability.