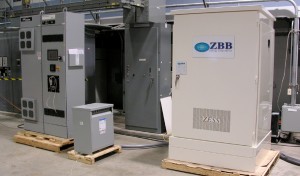 The in-lab grid systems are connected via the Modbus protocol, enabling control of the zinc bromine battery and Schweitzer Engineering Laboratories 751A Feeder Protection relays. The latter protect each component on the grid from standard fault conditions. The entire lab is controlled by a dSPACE rapid-prototyping system, which enables the researchers to create and test control algorithms in MATLAB and Simulink and rapidly implement them in the laboratory. The power electronics converter (see Figure 8) enables a hybrid power conversion system to integrate various energy sources (e.g., wind and traditional generation such as hydro) with the energy storage system, and manages power and energy, with a single point of connection to the utility grid. The converter’s salient features are a 300V dc internal bus, a dc/ac converter that interfaces the bus to the ac utility connection, and two dc/dc converters that tie two energy storage mediums to the bus. The developing lab-grid is employed to experimentally validate simulations used to study effects of increasing renewable power generation penetration onto the grid. The research began as part of a contract with the Bonneville Power Administration, extending from 10/1/08 â€“ 9/30/09. Through funding from this Grainger award, the lead contract graduate student was able to continue advancing the in-lab grid power transfer and control work.