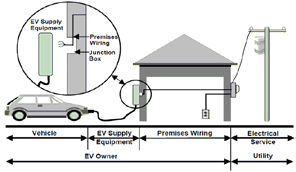 This study reviews the current status of charging and chargers for electric vehicles (EVs)/plug-in hybrid electric vehicles (PHEVs) and their utility grid interaction. PHEVs and EVs are an area of much interest for researchers because of their attractive properties of reducing gasoline usage and lower greenhouse gas emissions when compared to conventional vehicles. With a target of one million PHEVs on American roads by 2015 (President Obama, 2008), US energy policy is supporting increasing the use of these vehicles as a transition technology from
conventional gasoline to electric vehicles.

The two predominant barriers to PHEVs and EVs market penetration include cost premiums related to batteries and charging infrastructure, as well public acceptance of the paradigm shift to plugging-in as opposed to fueling-up. The performance of battery modules depends both on module design, module use and charging. Battery chargers, then, play a critical role in the evolution of this technology. Generally, there are two types of battery chargers: on-board and off-board. As the on-board charger should always be carried by the vehicle, the weight and space as well as the cost must be minimized. An on-board battery charger is an interesting option for PHEV users as it allows them to charge their vehicles everywhere that a suitable power source is available. The availability of a rich charging infrastructure can reduce the onboard energy storage requirement for PHEVs. The off-board battery charger can be designed with either a high or low charging rate and is not limited by weight and size. The off-board charger is suitable for charging the vehicle during the night with a long charging time or for a public station with a faster charging time. Figure 19 illustrates battery charging system configurations. Internationally it is expected that there will be three levels of socket charging: Level 1, Level 2, and Level 3. Properties of charging power levels are shown in Table 1.

EVs/PHEVs can charge the battery using electricity from an electric power grid, referred to as grid-to-vehicle (G2V) operation, or discharge it to an electric power grid during parking hours, also referred to as vehicle-to-grid (V2G) operation. V2G vehicles can reduce the lifetime cost of PHEVs, thereby making them more attractive, and if V2G increases the market share of PHEVs, the benefits of PHEV use increase. This concept allows V2G vehicles to provide power to help balance loads by valley filling and peak shaving. It offers utilities new ways to provide regulation services and spinning reserves. In future development, it has been proposed that such use of electric vehicles could buffer renewable power sources such as wind power, for example, by storing excess energy produced during windy periods and providing it to the grid during high load periods, thus effectively stabilizing wind power intermittency.