This research is motivated in part by the National Aeronautics and Space Administration (NASA) under Grant NNX14AL79A purposed for Space Science and Applications – Basic Research studies currently supporting the first iteration development of a permanent magnet synchronous machine (PMSM) intended for eventual use as a propulsor within aircraft. The current electronic control architecture of the system includes an array of field programmable gate arrays (FPGAs) controlling the gate signals to each of the cascaded flying capacitor multi-level inverters needed for each phase of the PMSM, along with a governing microcontroller that will process feedback and control the PMSM’s rotation speed under varying torque load, as well as communicate the 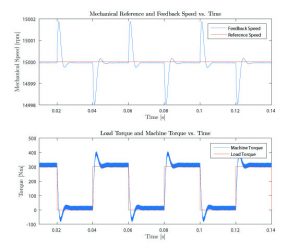 desired motor state to the FPGAs. The focus is on the control design and its simulation for one possible control alternative, namely an adaptation of volts-per-hertz scalar control, specifically targeted towards high-pole-count, high-speed PMSMs. The architecture for this design is given in Figure 10. This control scheme is capable of tracking speed with less than one percent error and adapts the output torque based upon loading conditions, as shown in Figure 11.