Xichen Jiang with adviser A. Domínguez-García

The integration of renewable resources, such as wind and solar, introduces generation uncertainties in the power system since these power sources are intermittent and difficult to forecast. Such uncertainties invariably affect system operations across all time scales—from day-ahead scheduling to automatic generation control—and across all subsystems, including transmission and generation. This work focuses on capturing the effect of uncertainty in electricity generation on the distribution side using a set-theoretic approach that is scalable to the system size. Using the proposed method, it is possible to determine whether the system static state variables, i.e., bus voltage magnitudes and angles, are within their acceptable ranges. 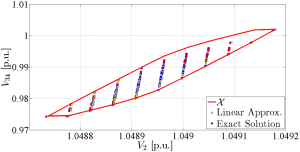 The generation uncertainties resulting from renewable resources are bounded using a zonotope. Zonotopes are chosen for their ease of representation and the advantage of being closed under linear transformations. A power system is linearized about its operating point and the zonotope is propagated through this linearized power flow model, resulting in another zonotope that captures all possible variations in the system static state variables. This method is highly accurate and easily scalable to a large system. For verification purposes, the proposed method has been simulated on an IEEE 34-bus benchmark distribution system. The resulting zonotope bounding the power system static state variables is shown in Fig. 31.

This research is funded by PSERC.