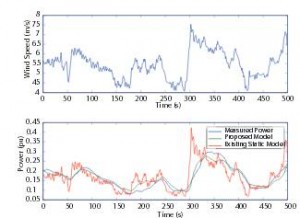 Justin Hughes with adviser A. Domínguez-García

Engineers are finding it useful to have models to investigate wind turbine performance due to the increasing penetration of wind power. Accurate modeling of aerodynamics, power electronics, electrical transients, or control systems is necessary for various applications. Using singular perturbation analysis, this research shows that under normal system operating conditions, the power injected in the network by a Type-C wind turbine generator (WTG) can be described by a first-order nonlinear dynamical model that relates the WTG power output to wind speed.
The proposed model is validated through simulation and comparison to a published differential algebraic equation model, as well as comparison to wind and power data from a real wind turbine. A parameter identification problem is also explored using the same data set. This analysis shows that turbine parameters can be estimated during normal machine operation. Figure 19 shows how our proposed model is an improvement over the existing static method for a selected time period. The technique may also be used to identify malfunctioning or under-performing turbines that require maintenance.

This research is supported by the National Science Foundation.