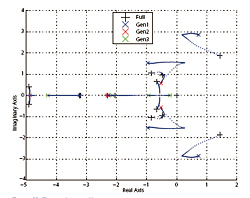 Small-signal stability analysis of a power system is used to determine if the power system can withstand small disturbances and operate in a satisfactory manner. This is traditionally accomplished by looking at the eigenvalues of a linearized power system. Once it is found that a power system is unstable, a corrective measure needs to be taken so that instability does not result.

One common problem that exists in the modern power system is low-frequency oscillations that lead to instability. This problem was solved by using a power system stabilizer (PSS) to damp out the unwanted oscillations. A question that arises from the use of PSS is on which generator the PSS should be placed. Traditionally, sensitivity analysis of eigenvalues is done to determine which states participate the most in the instability and place the PSS at the generator of those states.

This work is supported by Grainger Fellowships.