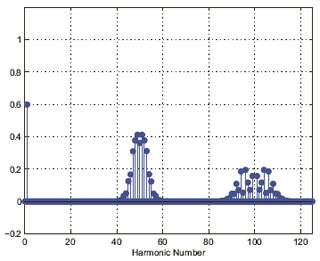 Figure 38: Spectrum for a modified-carrier PWM.

Switching power conversion for portable communications, personal digital assistants and most other electronic products is controlled through PWM. Since PWM produces strong components at the switching frequency and its multiples, one objective of this project is to study spectral characteristics of PWM for purposes of electromagnetic interference (EMI) and switching loss management. The desired result is to produce PWM signals with a continuous and flat spectrum instead of discrete harmonics. 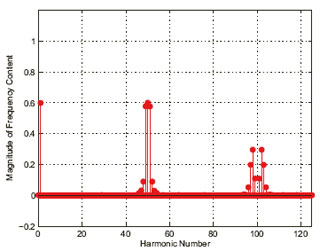 Two directions have been tried to address spectral characteristics of a PWM signal. One approach is to modify the format of carrier signals: instead of using a ramp or triangleshaped waveform as the reference carrier signal, some sort of variation is embedded into the carrier signal. The variation can be completely random or a certain pattern. By varying the carrier signal, a continuous spectrum can be achieved. A second approach to address spectrum spreading is to alter the modulating function. The modulating function is predistorted before comparing it against the reference carrier signal. The predistortion term interacts with the switching harmonics such that certain harmonics can be cancelled or altered.