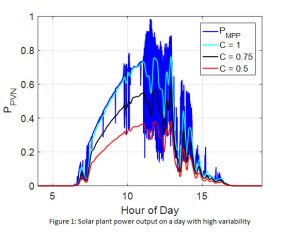 Maximum power point (MPP) tracking is the standard control scheme for photovoltaic (PV) arrays of all sizes. Inverter tracking algorithms work on second to sub-second time scales and can track most naturally occurring irradiance changes, such as moving cloud coverage. Fast response tracking imposes large power swings on the grid which must be absorbed in spinning reverses. As PV penetration increases and replaces traditional spinning generation, there is concern the grid’s voltage and frequency stability could be compromised.

Several solutions have been proposed to handle the common PV variability problem. Geographically widespread solar arrays have been shown to “smooth” one another’s variability. Energy storage systems (ESS) ranging from battery systems, gas turbines, and capacitors have been proposed to offset large power swings. Sole reliance on the ESS to offset these swings requires large and expensive components. We investigate an alternative PV control scheme which tracks the low-frequency daily irradiance profile rather than MPP operation. As shown in Figure 41, always tracking the MPP can impose large degrees of variability on the grid. The alternative set points, given by the different C values, offer much smoother power profiles. The question then becomes if these set points are reachable using standard array control schemes and/or an added energy storage system, such as a battery bank.  The cost benefit of the different methods will ultimately decide the optimal approach. We have also begun to look into combined multi-array control to establish pseudo-operating reserves. Geographically diverse arrays, each operating with a small headroom, establish a regional reserve supply, which can be quickly called upon when power fluctuates on a subset of the arrays.