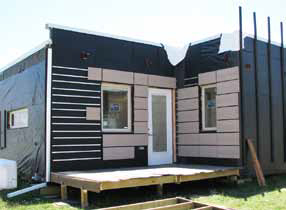 The 2011 University of Illinois Solar Decathlon entry, the modular Re_Home designed to be quickly constructed after a tornado in the Midwest, won seventh place overall in the US Department of Engineering competition in Washington, DC. The Re_Home: Re_act, Re_spond, Re_consider, Re_build, Re_invest and Re_newable team was led by Professor Xinlei Wang, Bioenvironmental Engineering, and professors from Architecture, Industrial Design, Agricultural and Biological Engineering, and Crop Sciences, with a research engineer from Agricultural
and Biological Engineering. Eight graduate students, including Stanton Cady, Electrical Team Lead, worked with 33 undergraduates (22 were engineering students). Among them was Grainger Undergraduate Research and Leadership awardee Sammy Nammari. The CEME also supported grad student Liangcheng Yang, who worked on Re_Home water treatment. The following pictures taken on June 29th and August 31st (right before the Open House and disassembly for the trip to DC), as well as at the competition in Washington, DC, allow us to view progress through the construction steps and see the finished house. (All the DC pictures are courtesy of the University of Illinois Solar Decathlon Team.) 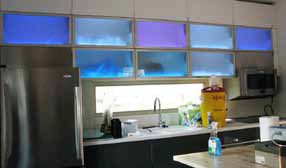 All entries were required to provide 850 square feet of living space, incorporate solar panels, be sustainable apart from the power grid, and fit into their geographical region. Insulation, efficient HVAC/ heating systems, and energy-use monitoring are essential. To this end, the iPAD II (Figure 1), with a custom interface, monitors and controls the HVAC, the two zones (modules) of the house, lights, temperature, hot water heater temperature, heat recovery system, all plug-in energy devices, and the solar array. Overall power usage plots energy usage over time. A wireless user interface connects it to the web. The yellow line shows the house is generating a surplus and the blue one how that energy is being consumed. Sensors in the windows (Figure 2) and doors will indicate when they are open. 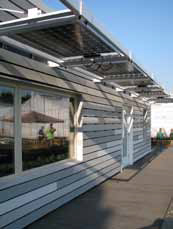 The two-module Re-home has nine-foot ceilings insulated at R 80 and walls, floor, and join (modular divide) at
R 60. Professor Mark Taylor, an architecture faculty member, is standing beneath the join of the kitchen/furnace/
HVAC/bathroom/bedroom module (to the right) and the living room/entertainment/office module to the left (Figure 3). The modules are offset to provide a private deck space for the bedroom (Figure 4) and a more open porch area off the living room/kitchen area (Figure 5). The contrasting siding for these two areas is Resista Siding, composed of 50% post-agricultural production rice husks. Both the Resista and the cedar siding for the rest of the house stand away from the building envelope so that no sun strikes the building.

Inside on the day of the U of I open house, we see the modular divide (rails for track lighting are being installed) with the furnace/hot water heater/HVAC ducts in the hallway and bedroom in the north module and the office/extra bedroom in the south module (Figure 6). Note the daybed support and desk. An option for this space is a flex wall in place of the storage area divider that would allow it to be used as a kid(s)’ room (Figure 7). Large windowsprovide ample working light by day, and LED sconces give soft light at night. All the flooring except in the bedroom is volcanic ash-colored Marmoleum made from natural materials. It is easy to clean and does not trap electrical energy.

Figure 17: Nighttime view from the southwest.

The living/dining/entertainment area (must feed a party of eight) adjoins the office and kitchen. Track lighting and LED sconces will light the space at night (Figure 8). On Open House day, we see that the kitchen cabinets also include multi-colored LEDs and energy-saving appliances (Figure 9). Exiting to the west, we see the northwest open deck space (for parties and gettogethers after a disaster), supports for an overhang, and four rows of PV panels (six to a row, two rows on each module). The PV array angles are optimized for location and can be changed mechanically according to the season. They are pre-installed on the modules and fold flat to ship (Figure 10).

Back inside, down the hall past the bathroom to the bedroom (DC view), we note the cork floor. It is quiet and one of the most sustainable natural materials (Figure 11). On Open House day we step outside the bedroom onto the deck to get another view of the four rows of PV panels, the overhang, prairie plants, and members of the student team (Figure 12). All the outside wood except the siding was reclaimed from a hog barn and an old fence. A view from the south (Figure 13) shows the large living area windows and the PV canopy around the house. These six canopy modules are translucent to allow light through but still provide shade (Figure 14).