At the end of 2015, The U of I Solar Decathlon team was invited to partner with Shanghai Jiao Tong University (SJTU) for the second Solar Decathlon China sponsored by the U.S. Department of Energy and China Nat 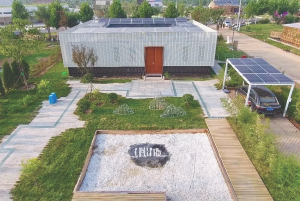 ional Energy Administration 2018 competition, to be held in August 2018 at Dezhou, Shandong Province, China. Twenty-two teams formed at forty-one universities from ten countries/regions competed. Shanghai Construction Group, a corporate sponsor, came on board at the beginning of the Spring semester to help the SJTU-UIUC team complete their project. At that point, “Waterside Cube,” a design that takes traditional dwellings in the southern part of the Yangtze River as a prototype, was selected to draw from traditional Chinese dwellings (especially the passive-energy-saving and traditional culture aspects) and meld these into a building complex that would save energy and improve the surrounding environment.

Based on the prototype of the traditional two-entry courtyard, where the entry courtyard is to receive guests and the internal one is for the family, the Waterside Cube simplified the entry courtyard into an attractive open space. Bedroom, kitchen, sanitation modules are embedded within the house around the internal courtyard, which functions as a “large living room”and supplies ventilation, shading, landscaping, lighting and drainage. The modules, along with many of the building components, including precast beams, wall panels, floors, stai

rcases, and insulation structures, were prefabricated and assembled on site. This allows flexibility in producing individual units and faster assembly at the building site, thereby lessening pollution and construction costs.

These modular assembly units can be extended to large-scale standardized production on the basis of functional requirements. The design concept extends from assembling buildings to assembling communities.

Water in the Waterside Cube serves multiple functions. While rainwater

collected in the traditional patio was ornamental, the Waterside Cube employs permeable paving to allow it to seep into the ground and replenish the groundwater. Rainwater is collected to irrigate planting boxes and other washing functions and to improve the microclimate. In the open space, it is sprayed through steel tubes coated with

fluorescent materials to create a unique landscape and a mysterious atmosphere at night. The HVAC coefficient of performance is improved by use of an evaporative condenser attached to the sprayer, which uses the principle of heat rejection to reduce the air-conditioning load by 20-30%, thereby decreasing the building’s energy consumption.

Power is furnished by 200-watt photovoltaic panels of single-crystal double-sided glass with up to 20.06% efficiency. A battery and an all-electric auto provide energy storage. These serve to reduce the influence of adverse weather conditions on indoor electricity needs and help cut peak-power demands to the grid. 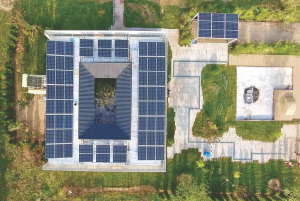 Target clients of the Waterside Cube can be categorized into three types: high-end clients with a whole set of customized, solar-powered smart-home systems; those who focus on constructing a new countryside to provide rural residents with substantial and economic low-energy homes; and those who participate in home businesses to promote solar energy.

Crossing cultures encouraged the joint team to recognize each other’s strengths and weaknesses. They communicated through WeChat, organizing bi-weekly video calls. All the official construction drawing were sketched in China using Autocad 2016 and then transferred and produced in Revit 2018. As many of the SJTU team’s documents were written solely in Mandarin, it was helpful that two members of the UIUC team’s Lighting, Appliances and Hous 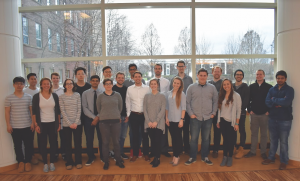 the joint team could focus on Waterside Cube. Seven U of I students traveled to Dezhou where the SJTU-UIUC team worked with a contractor to realize and assemble the Waterside Cube. 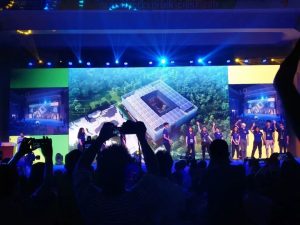