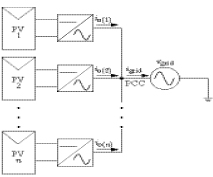 Multiple inverters are coordinated to achieve system-level objectives and cost reductions. This procedure can be applied to highly distributed energy systems such as photovoltaics, fuel-cells, and batteries with the following benefits: a very-low distortion ac output current; reduced filtering component
requirements; higher efficiency; and miniaturization. For both the series and parallel configurations, a variation of established PWM techniques is used. Interleaving is implemented by phase-shifting the PWM carrier waveform of each inverter by a unique multiple of Tc/n, where Tc is the period of the carrier waveform and n is the number of inverters. As a result, the switching of the multiple inverters is staggered such that cancellation of higher order harmonics and distortion is accomplished. In previous work a multi-level inverter was developed using a large number of series-connected low-power converters. Experimental results confirmed that a low-distortion voltage waveform could be constructed by the multiple series inverters. Recent research in the series system has been focused on cost, fabrication, and a detailed investigation of various implementation issues.

Lately, effort has been predominantly focused on exploring parallel interleaved systems. This topology offers a high level of backwards compatibility with existing designs. In addition, results have shown that parallel interleaved three-phase inverters offer the potential for drastic reductions in costs while improving reliability and efficiency. Figure 46 shows a 1-line diagram of an example system consisting of n parallel interleaved photovoltaic inverters. 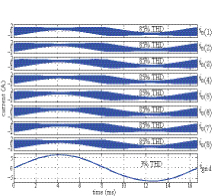 Because interleaving is used, the ripple associated with the individual inverters is cancelled once summed at the point of common coupling (PCC) with the grid utility. Figure 47 shows the simulated result of eight 200 W interleaved parallel inverters configured in parallel as shown in Figure 47.

Results demonstrate that despite the very high total harmonic distortion associated with each individual inverter, the total aggregate current at the PCC, igrid, has a very low distortion, (closely follows a perfect sinusoid). This favorable result was attained despite a 10× size reduction in the inverter output filters. The reduction in filter requirements can be used to reduce costs while maintaining desired system level performance. Future effort will be aimed towards circuit design optimization for minimal power loss and the development of a hardware testbed.

This research was supported by the National Science Foundation Graduate Research Fellowship Program, the Grainger Center for Electric Machinery and Electromechanics, and Sandia National Laboratories. Sandia National Laboratories is a multi-program laboratory managed and operated by Sandia Corporation, a wholly owned subsidiary of Lockheed Martin Corporation, for the U.S. Department of Energy’s National Nuclear Security Administration under contract DEAC04- 94AL85000.