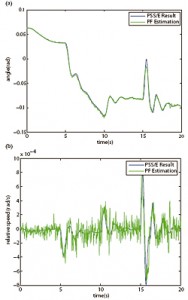 Figure 36: The PSS/E results and PF estimation results of machine angle (a) and speed (b) of machine 1.

Many power systems are currently operating under heavily stressed conditions and with rather slim stability and security. There is an acute need to better understand the nature of power system dynamic behavior and to have good knowledge of the dynamic states of the system in order to be prepared for critical situations as they arise. As such, the updating of dynamic system models in real time is a key requirement. The deployment of phasor measurement units (PMUs) enables the direct observation of system oscillations, including those under system disturbances.

We studied advanced filtering concepts, such as sequential importance sampling, and applied them to real-time estimation of power system dynamics. We used the PSS/E simulation package and WSCC 3-machine-9-bus system to generate the data as a realistic simulation. The PSS/E output was then used as the measurements for load identification. We used GENTRA for a machine model, IEEE1 for the exciter and TGOV1 for the governor. A system evolution equation was used in the estimation to apply the nonlinear filter algorithm of particle filters (PF) and measurements were calculated.

With augmented PFs, we can estimate parameters simultaneously with the states. Here we try to estimate the inertia H = 23.64. With an initial guess Hstarted = 15 , we can get ean(Hestimated|t=0.5) = 20.1185 and mean(Hestimated|t=2.5) = 22.2119. The simulation results in Figure 36 show that both machine states and parameters can be accurately estimated; hence more realistic system models based on frequently updated parameters are obtainable with the PMU data collected.

This work is funded by the Grainger Center for Electric Machinery and Electromechanics.