The results of two of the algorithms developed are shown in Figure 25 below. The convergence rate of two algorithms developed were compared to the classical Newton’s method on a modified IEEE 14-bus test feeder. The participation factor of the five generators was set as 0.2 each so that all the generators can share the slack in the network instead of dedicating a slack bus in the network. The algorithms converged to the true solution of the power-flow problem as desired when the step size is chosen within a certain boundary. This research is supported by the Department of Energy. 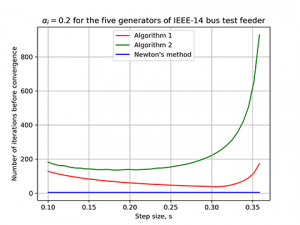