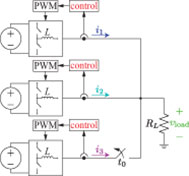 A highly distributed infrastructure of energy sources and storage can be used to enhance energy supply reliability. These resources will allow regional areas to separate from the larger power grid in the event of failure and form a self-sustained network called a microgrid. In this work, it is proposed that each inverter be controlled to mimic the behavior of a passive oscillator. When passive oscillators are interconnected in a network such that they are coupled, it can be shown that the system maintains stability and synchronization while being highly robust to disturbances. In addition, the number of inverters in the system can be arbitrarily large and communication is not needed.

For hardware implementation, the non-linear differential equations of the passive oscillator are programmed into the digital controller corresponding to each inverter. Unlike conventional inverter control techniques, the proposed technique does not require a phase-locked-loop. A system of three parallel half-bridge inverters was used to experimentally validate the proposed control method. Figure 21 shows the hardware configuration. The controller was designed to oscillate at 60 Hz and the desired RMS voltage was set to 60 V. The three inverters were controlled using a microcontroller. A set of experiments was conducted to demonstrate the transient stability of the inverter system. In the case-study below, the third inverter unit was abruptly removed at t = t0. As shown in Figure 22, the remaining inverters successfully maintained synchronization, shared the load, and regulated the system voltage. This research is supported by a National Science Foundation Graduate Research Fellowship and the Grainger Center for Electromechanics and Machinery.

This research is funded by the Grainger Center for Electric Machinery and Electromechanics.