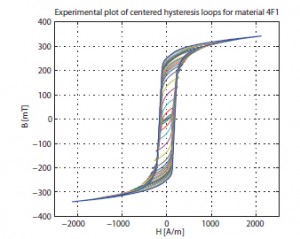 This project focuses on a new paradigm of voltage regulator (VR) optimization for fast transient loads. By integrating the power converter and processor load as part of one package, unwanted parasitics can be eliminated; both static and dynamic performance can be improved. Successful design of integrated VRs requires a comprehensive methodology for chip-embedded inductors. A time-domain hysteresis model is under development as part of this scheme.

The model is based on the Preisach operator, a powerful mathematical tool that has been used to model the phenomena of hysteresis for many years. The first step in creating a Preisach model is to identify its density function. For any soft magnetic material, the density function can be numerically represented by a set of discrete cells that form the Preisach plane. Cell values are determined by solving the set of linear equations constructed based on experimental data. Then, for any given excitation field, the response can be computed by integrating over the Preisach plane numerically. 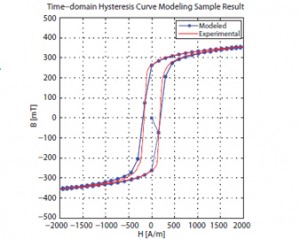 Centered B-H loops for two candidates of magnetic materials were measured. The experimental set-up was developed in accordance with IEEE Standards. Figure 26 shows an example of obtained B-H curves. Using ten of the measured loops, the Preisach density function is discretized into 200 cells. Then, for any given input current waveform, the model traces its history line on the Preisach plane and performs numerical integration over the bordered plane area to obtain corresponding magnetization. The model is established in MATLAB software, and it is reaching the curves do not completely match; sources of the discrepancy are under investigation. Once the most accurate modeled result is obtained, the model is then ready to be utilized to predict desired magnetic characteristics, such as power losses, permeability, and inductance.

This research was supported by the Intel Corporation under grant 2008-01352.