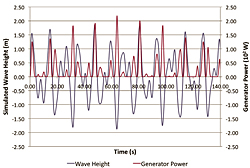 The project was to develop a small bench-top workstation for testing wave energy control algorithms. A power-processing unit converted 42 V of power to dc for the motor and generator. The motor provided a torque according to hydrodynamics models and a simulated wave environment, i.e., it acted like the waves. The generator converted the torque and speed from the motor to electricity. This machine was controlled according to an optimal wave energy extraction algorithm. The intent of the workstation is to assist the engineer
in the development and optimization of this algorithm. A master control board (MCB) used a digital signal processor to execute the control algorithm for the generator and control the motor according to the hydrodynamics modeling and simulated wave climate.

The project was completed and very successful. The results of the work were presented at the Energy Ocean conference in Galveston, Texas, in June. The results are shown in Figure 23. The blue line and left axis is wave height, generated according to a stochastic wave generation algorithm running on the MCB. The motor then produces a torque according to hydrodynamics equations running on the MCB. The generator output power is shown in red, and the right-hand axis. The generator is being controlled with a simple torque-proportional-to-speed algorithm, also being run by the MCB. The result is a compact and safe desktop tool to rapidly develop and test control algorithms for an ocean wave energy generator.

The professors and students of Oregon State University wish to thank the Grainger CEME for generously funding this project.