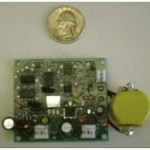 Proton exchange membrane fuel cell systems have not yet penetrated the lowpower (<50 W) portable energy source market, largely due to complexity of control and the balance of plant systems required. Even though the fuel cell and fuel container may scale down well, the pumps, blowers, and power converters required may dominate the mass of the system. Our work focuses on the tradeoff between efficiency and mass of the converter and achieving the minimum mass of both the converter and fuel. The effort has focused on boost converters, however the method can be applied to any converter topology. 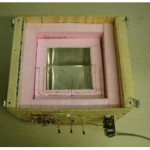 A very important trade-off is the relationship between mission length and optimal converter efficiency. A short mission time can use an inefficient converter by adding a small amount of fuel. Conversely on a long mission, the fuel is the most significant mass in the system, and any drop in efficiency has a larger effect on the net mass. The result of preliminary optimization studies can be seen in Figure 34. As the mission lengths approach 1000 h, the maximum possible efficiency is desired. This optimization is dependent on characterizing the components of the fuel cell stack, which is the subject of ongoing work in conjunction with a fuel cell company, INI Power Systems. Experimental verification of the loss calculations is being performed using calorimetry: calculating losses directly through thermal measurements rather than electrical measurements. This is more effective at high-efficiency levels.