CEME Collaborator Julia Zhang – Oregon State University
This research develops simulations to analyze mechanical performance and reliability of an interior permanent magnet synchronous machine using laser beam melting (LBM), an additive 3D printed metal manufacturing process. Simulations were performed with the finite element tool Abaqus. The simulated machine is similar in size and geometry to the traction rotor in a Toyota Prius. The actual device is manufactured in layers approximately 100 µm thick using LBM. Simulations of two- and three-layer devices with one and two bonding regions have been completed and documented.
The following assumptions were made in the simulations. First, the full rotor could be modeled as three systems with unequal dimensions in the layers, allowing the material to be modeled as heterogeneous with different bonding strengths between the layers. Second, because the bonding coefficients for how well the material holds together mechanically were not well understood from research sources, values were selected based on Abaqus tutorials. Using different values could lead to dramatically different results. Third, bonding between the sections could be approximated using cohesive behavior under the Traction-Separation law in Abaqus. With this cohesive behavior, the material is not assumed to be rigid with infinite strength. Therefore a simulation unique to 3D printed materials could be developed. Figure 27 depicts the damage percentage to the cohesive layers simulated in Abaqus.
To validate this modeling, it will be necessary to develop a method of obtaining more accurate bonding coefficients, which can be done by performing a tensile test on the specimen shown in Fig. 28. This metal bar produced through an LBM process was purchased for our research, and the layering on the side of the bar can be seen. Performing the test will give information on Young’s modulus, tensile strength, Poisson’s ratio, and other pieces of mechanical information which could be used to more accurately predict usable values for the Abaqus mechanical model. Future work would develop an electromagnetic performance analysis of the metal produced by LBM.
The Wallace Energy Systems and Renewables Facility at Oregon State University appreciates that the Grainger Center for Electric Machinery and Electromechanics provided generous research funding to support this research. 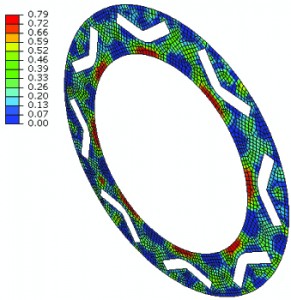 Figure 27: Damage percentage to the cohesive layers simulated in Abaqus

Figure 28: Metal bar produced through an LBM process showing layering on the side of the bar