PhD student Madi Zholbaryssov with advisor A. Domínguez-García
We address the microgrid generation control problem, with special emphasis on frequency regulation of lossless microgrids with inverter-interfaced generators. First, we propose a control strategy based on a decomposition of the microgrid network into subnetworks which form an acyclic graph. Each subnetwork is controlled independently from the rest and has its own control objectives: (i) all phases must be stabilized, and (ii) the control input needs to follow a reference signal. We propose three types of control for each subnetwork: (i) a dynamic output feedback, (ii) a local output feedback with a time-varying setpoint, and (iii) a contractive iteration-based state feedback. Under certain assumptions, we show that all these three controls globally stabilize the microgrid. Local output feedback control with a slowly time-varying setpoint can be applied to the whole network or certain subnetworks; this control assumes that the initial conditions and the desired equilibrium point satisfy a phase cohesiveness property.
Alternatively, the dynamic output feedback control is based on the assumption that phase information for all loads and inverters of the same subnetwork is available. Another alternative control strategy is based on solving fixed-point equations using a contractive iteration method which requires the coupling coefficients between inverters and loads to be large enough.
Consider a 9-bus power network G in Figure 23 where nodes 1, 2, and 3 correspond to generators; remaining nodes correspond to loads. We decompose G into 2 subnetworks G1 and G2. Figure 24 demonstrates simulation results. As expected, y1, y2 and y3 converge to the desired setpoints. This research is supported by Information Trust Institute ICR – A2503 Cost Share. 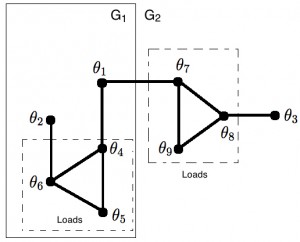 Figure 23: Example of a microgrid with
3 inverters and 6 loads 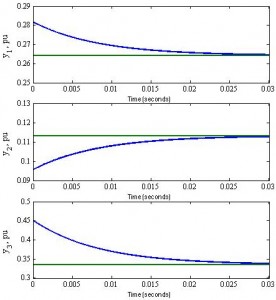 Figure 24: Convergence of y1, y2, and y3 to desired setpoints