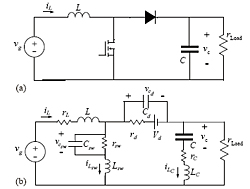 Simulation of power converters includes the mixture of continuous and discrete events, where the presence of parasitic and switching transients introduces a wide range of time scales that span several orders of magnitude. Each switching event excites transients. This periodically introduces stiff equations, thus undermining the advantages of the conventional ordinary differential equation solvers. The periodic excitations and ill-conditioning of system equations jeopardize simulation stability and make it computationally prohibitive. Multi-resolution simulation offers rapid simulation of power electronics converters from a general to very detailed consideration. A multi-resolution simulation framework is set forth for pulse-width modulation dc-dc converters.

A highly detailed model with parasitic elements and precise representation of switch and passive components is considered first. As an example, a boost converter is shown in Figure 25. A detailed full-order model of the converter is built that appropriately includes the system parasitic, switching nonlinearity,
and switching event detection. The state equations are automatically extracted in each switching instance based on the netlist of the converter under study. Switching events are handled by built-in state-event detectors. When a switching event is detected, the simulator proceeds among different state vectors while a succession of initial-value boundary problems is solved. The state equations are useful for automated model reduction routines and allow a wide variety of integration algorithms.

Numerically rigorous order-reduction techniques are then used to extract a lower order model for the desired simulation resolution. The user determines the bandwidth (i.e., level of resolution) that is desired for a specific phase of design. As an example, the diode current is shown in Figure 26. The ringing, reverse recovery effects, switching edge transients, and high-frequency dynamics of the high-order model are absent in the low-resolution model, while the overall long-term behaviour is successfully captured. By including the state variables of the highest order model and preserving the input-output response in the order-reduction process, the simulator engine can maneuver between different resolutions. The simulation resolution can be adjusted at the user’s discretion, even during the simulation run. The state continuity across different resolutions and switching events is ensured using appropriate similarity transforms. This methodology can also be used for accelerated steady-state solution of fast state variables. Meanwhile, the computational intensity is significantly reduced due to the elimination of the slow eigenvalues, and computational accuracy greatly improved due to the improved condition number of the system matrices.

This work is supported by the Grainger Center for Electric Machinery and Electromechanics.