Xuan (Melody) Yi with adviser K. Haran
Environmentally friendly and fuel-efficient aircraft are required for the sustainability of the aviation industry. It has been proven theoretically that superconducting machines can power electric airplanes to carry hundreds of people. These machines apply superconducting technology to produce dramatically high flux density and high current density, and thus can significantly reduce weight/volume. Conventional machines for aircraft application must reach a power density of eight hp/lb (four times greater than the state-of-the-art) to produce similar results. In this project funded by NASA and the Grainger Center for Electric Machinery and Electromechanics, a non-cryogenic, high-frequency, high-pole-count and high-speed air-core permanent magnet motor is proposed to meet this requirement. In addition, an efficient multi-physics optimization method that can accurately predict electric and thermal performance of such a machine is developed and verified with finite element analysis (FEA). Optimum machine sizing is obtained by using a genetic algorithm coupled with an established multi-physics model.

An electromagnetic machine model has been realized using Maxwell’s equations to solve the flux density distribution in the air-gap winding. Results show that the fundamental component of radial and tangential flux density in the analytical solution agrees with the FEA results within a margin of error of 3 percent, as shown in Figures 3 and 4. The average torque estimation agrees with the FEA result within a margin of error of 5 percent.

Future research will focus on developing a thermal equivalent circuit of the machine and an optimization process. 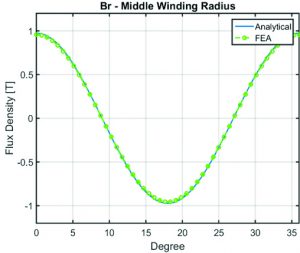 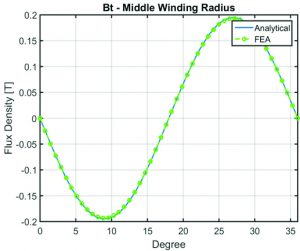