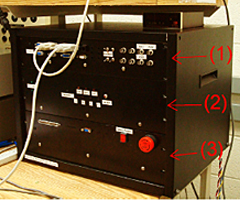 Unique methods of induction machine control developed by Francisco di Silvestro at the University of Illinois in the early 1990s, such as his nonlinear flux-observer-based control, reduced-order model control, and input-output decoupling control, will soon be implemented in hardware in our laboratory. But first, we must have a very accurate model of the induction motor to be controlled, and thus a parameterization of the motor must be done. Tests for motor parameterization, including no-load, locked rotor, and dc tests have been completed. Results in the form of torque speed curves of different motors at different loads have been obtained and match to first order our theoretical calculations. In the near future, detailed analyses that include many secondary effects to more accurately model our induction motors will be carried out, as well as tests for rotor inertia.

The next phase is to look at the hardware to be used to execute the control algorithms, including our in-house research-grade modular inverter shown Figure 6. In this figure, the top module (1) is the control stage, the middle module (2) is the power stage, and the lower module (3) is the front end. A few uncontrolled runs of an induction motor were done to confirm its operation using a 10 kW IGBT power stage. A significant learning curve was encountered when trying to run the modular inverter as a whole unit. Once all of the parameterization has been completed for all of the motors in our lab, we should be able to control the dynamics of the induction motor and validate the control models developed by di Silvestro.

This work is supported by the Grainger Center for Electric Machinery and Electromechanics.