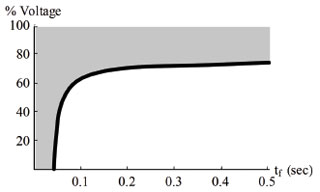 One method to mitigate the destabilizing effects of constant-power loads is the powerbuffer concept. A power buffer is a device that presents controlled impedance to the supply system while constant power is delivered to a load. A power buffer may include additional hardware, or merely modify the controls of an existing active front end. A simple conceptual model power system with a power buffer and constant-power load is shown in Figure 22. A geometric manifold control approach has been developed that simplifies the buffer algorithm to a unified control law that can be applied to a wide range of active front ends. Optimal control theory was used to determine the manifold that extends the buffer’s sustaining time while enhancing its stabilization characteristics. For an example 208 Vac 3-phase system and a 1 kW constant-power load, this buffer design can mitigate a voltage sag of magnitude and duration that falls in the shaded area of Figure 23. Through experimental results the proposed control has been shown to negate the effects of constant power.