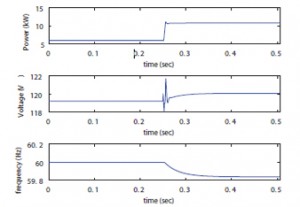 A microgrid is a power system utilizing distributed generation capable of supplying uninterruptible power to its local loads. Energy sources that may be integrated into a microgrid include, but are not limited to, internal combustion engines, microturbines, gas turbines, wind turbines, photovoltaics, fuel cells, and batteries. Each energy source is rectified and integrated into the system using inverters interfaced to a dc bus. Inverters are equipped with controls to provide stable operation of the system while uninterrupted power is supplied to the loads during islanding and reconnection to the grid. 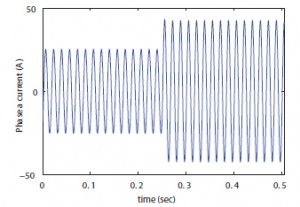 This work investigates the use of the automated state-model generation algorithm to simulate and analyze microgrid power systems. The algorithm was implemented due to its inherent advantages in modeling hard-switching events such as the opening or closing of a three-phase switch and because control stability analysis may be performed using state-space methods. A complete model has been assembled and the simulations agree with the anticipated behavior of the system controls. Figures 24 and 25 show the response of the power source and its inverter, respectively, after the microgrid is islanded at 0.25 seconds.

This work was supported by the Graduate College Fellowship and SURGE Fellowship.