Increasing the power density of electric machines operating in high ambient temperatures is a challenge, as all the materials involved must be rated for operation at those temperatures. To improve cooling in electric machines exposed to temperatures greater than 400°C, a direct winding heat exchanger (DWHX) manufactured with ceramics is investigated in this project supported by the Grainger Center for Electric Machinery and Electromechanics. The DWHX has coolant channels in close contact with the windings, thus improving performance over the water jacket, direct oil-cooled and air-cooled methods. In some high-temperature applications, a lower temperature coolant, such as oil, is used to cool the machine. By using the DWHX as an electrical insulator, glycol-water mixtures can replace oil to reduce pumping losses and improve convection heat transfer. Initial analysis has shown that the ceramic DWHX with glycol-water coolant achieves 2.6 times higher heat-transfer coefficient and 26.1% of the pumping loss compared to the direct oil-cooling method. This improved cooling enables a higher power density in the machine.
Further improvements to the convection heat transfer were investigated, such as adding parallel channels and staggered pin fins as shown in Figure 6. 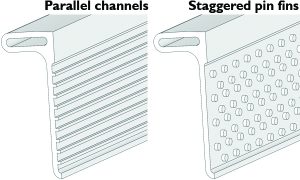 The parallel channel concept was shown to have the best trade-off between pumping losses and improved heat transfer. To validate the design of a ceramic DWHX, it must be tested in a way that is representative of the electric machine stator. The motorette test concept shown in Figure 7 achieves this by winding

two teeth with three DWHX, achieving symmetry for the middle DWHX. Dc current in the wire simulates winding losses, and iron losses are simulated by adding a film heater on the inside diameter of the teeth. The motorette is under construction using in-house capabilities for laser-cutting electrical steel laminations, winding, and vacuum encapsulation. The winding hot-spot temperature will be measured and compared to the predicted values.