The main challenge with superconducting (full or partial) machines is the need to maintain the superconducting coils at cryogenic temperatures. The field coils mounted on the rotor require a supporting structure to hold them at high RPM and to transfer the torque from the winding to the shaft. This research concentrates on such a supporting structure for a superconducting motor with liquid cooling. The optimized thickness and locations of the torque tubes are identified so that the total motor mass is minimized. Also, the cooling system, including the liquid-cooling paths, is integrated to the supporting structure to further reduce the weight, as shown in Figure 2. This research is supported by the NASA-funded Center for Cryogenic High-Efficiency Electrical Technologies for Aircraft (CHEETA) project. 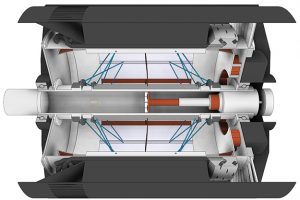