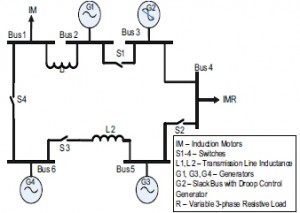 Small-scale electric grids containing their own energy sources, distribution networks and loads, sometimes called microgrids, are being explored for use in military installations, disaster relief efforts, and critical industries that require reliable power. Through the Army Corps of Engineers Construction Engineering Research Lab (CERL), a droop-control scheme that would allow greater than traditional dynamic stability in a microgrid is being investigated.

The power control scheme for a stand-alone system should have the ability to allow additional power sources to come on-line at any time as well as the capability to overcome the loss of any generating source. A droop control should provide greater stability with sudden changes in loads, giving a small-scale grid greater flexibility.

A system’s reactive power can be managed by varying the voltages of the energy sources. The frequency of the grid can be directly tied to the power transferred across the system. A droop control can be set up so that as the power in the system increases, the frequency decreases at a pre-set rate. The concept behind using a droop control scheme is that by allowing the frequency of the system to fluctuate, a damping factor is introduced to provide better ride-through for abrupt load changes than in a stiff grid.

raditional power-flow solutions cannot be used to analyze this problem as those programs assume a set frequency and a predetermined power-sharing scheme using one slack bus to compensate for any change in load. Analytical tools need to be developed to take into account the effect of varying the frequency and to provide a solution to power sharing dependent on a number of variables, including the rate of frequency droop.

A small-scale, low-inertia stand-alone grid, as shown in Figure 18, was constructed in the Grainger Power Lab in Everitt Lab. determine its effect. Initially, one generator had a droop-control scheme and the other system generators were in torque mode, automatically synchronizing to the frequency set by the droop-controlled generator. Once that was accomplished, the other generators were configured, one at a time, to incorporate a droop-control scheme and the dynamic behavior of the system was recorded. It was observed that droop control increased system stability, and as the number of generators with droop control was increased, the grid became even more stable. However, when there were multiple generators with a droop-control rate, load sharing between generators became increasingly unbalanced leading to possible failures within the system. Oscillations may also occur due to differing droop-control rates on multiple generators. That stability issue is being investigated.

This research was supported by CERL and the Grainger Center for Electric Machinery and Electromechanics.