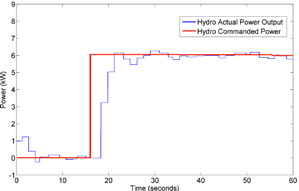 The lab is controled by a dSPACE rapid-prototyping system, enabling researchers to create and test control algorithms in MATLAB and Simulink and rapidly implement them. Using this system and a stateof-the-art SEL751A feeder protection relay from Schweitzer Engineering, we are able to automatically spin up the WRIG, synchronize its three-phase waveform to our in-lab grid and automatically close the WRIG into the grid. A software state machine is used to perform the synchronization and closing of the WRIG. Real power is controlled through the torque command given to a four-quadrant adjustable speed drive and reactive power is controlled through the rotor voltage injected from a power supply under closed-loop control by dSPACE (see Figure 43). The pumped hydro resource emulates the Grand Coulee Dam with corresponding simulated energy storage capacity, efficiency, power output and response time. The pumped hydro system will receive commands based on hydro power output in the Bonneville Power Administration service area. Research was also initiated to investigate the pumped hydro role in resetting the energy storage system’s state of charge during off-peak hours. Finally, work on the energy controllers was advanced and detailed simulations have been completed to evaluate the performance of the energy storage controllers.