Jiangmeng Zhang with adviser A. Domínguez-García 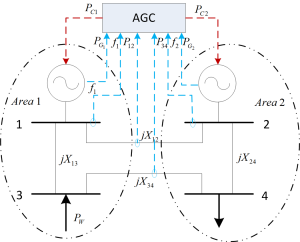 Information technology (IT) systems are increasingly being incorporated into power systems as a result of visions, such as the US Department of Energy Smart Grid. As a consequence, there is a tighter coupling between physical and cyber components. This raises new challenges in power system operations. Automatic generation control (AGC), as shown in Fig. 29, is the only system-level automatic closed-loop control system over the IT infrastructure of a power system. It takes measurements and sends out commands through the network. Thus, it is sensitive to cyber events, such as measurement noise and manipulation, as well as communication delay, which would significantly influence power system performance. Examining the impact of measurement noise on system performance, we found that AGC is robust to additive, fixed-intensity, white noise imposed on the measurements that the AGC system uses as inputs. However, a class of random noise with state-dependent intensity has been discovered that will cause divergence of the power system states for any realized sample paths.

This research is supported by Trustworthy Cyber Infrastructure for the Power Grid.