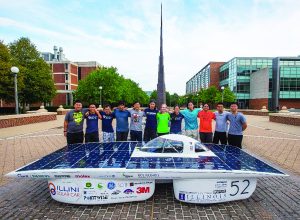 The day before the car was shipped, part of the summer team who spent days and nights completing it stopped for a photo

Illini Solar Car is a multidisciplinary team of students who designs and builds solar cars to race in cross-country solar races like the World Solar Challenge and the American Solar Challenge. These races allow the students to both apply their technical knowledge to build a road-worthy car, and learn soft skills in managing race logistics, including raising funds. 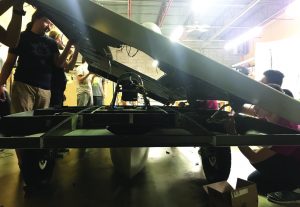 Testing fit and clearance of the top shell (b) 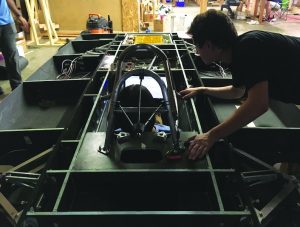 Testing fit and clearance of the top shel hinge (a)

The team is currently in its third year. They are competing in the World Solar Challenge in Melbourne, Australia along with teams from other top universities such as MIT, Stanford University, the University of California – Berkeley, and the University of Michigan. The competition is from October 3rd – 13th and the road race from the 10th – 13th.  The over-all goal is to build road-worthy and practical multiple-seater solar cars. 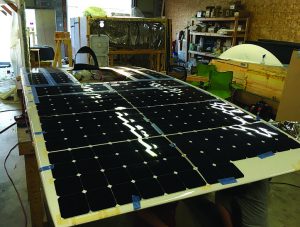 A week before the completion, team members started driving the car and discovered random bugs in the electrical system that were not present on the test bench. They worked together to eliminate the bugs to ensure the car would drive smoothly. testDriver and  Bugs1.

They tested the fit and clearance of the top shell hinge. fitTopSHell_Hinge.tif  fitTopshellHinge2 Next was to dry-fit the solar modules before gluing them onto the top shell.  dryFitSolarModules

The day before the car was shipped, the team brought it out on campus and took pictures. Shown is part of the summer team who spent days and nights completing it.   summerTeam 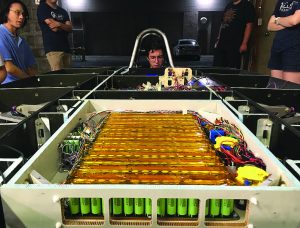 The solar car weighs 451 lbs. The morning before shipping it to Australia, the team packed the solar car into a wooden crate to ensure it would not be damaged during the journey. Shown is the half-completed crate.

Professors Pilawa and Philpott, in Mechanical Engineering, advise the group composed of more than 50 students actively involved in this project. They are from various departments, such as the Electrical and Computer Engineering, Mechanical Engineering, and Aerospace Engineering, Graduate students Derek Chou and Phuc Huynh (see their research summaries below) worked with the mostly undergraduate team.  Derek helped with the dc-dc converter and maximum power point tracker (98.75% efficient) and Phuc worked on the battery protection system for the 20 kg lithium-ion battery pack shown above in Testing for bugs. 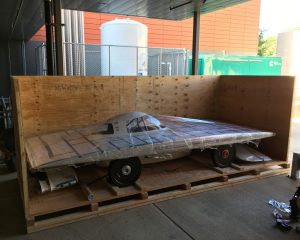 The morning before shipping the solar car, which weighs 451 lbs., to Australia, the team packed it into a wooden crate to ensure it would not be damaged during the journey. Shown is the half-completed crate

This project is sponsored by various companies, including 3M, Siemens, Molex, General Electric, Chevron, and Phillips Chemical; alumni; and on-campus entities, including the University of Illinois Student Sustainability Committee, the ECE Department, and the Grainger Center for Electric Machinery and Electromechanics.