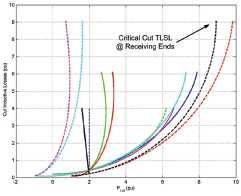 This topic deals with static transfer stability limits (STSL) and transfer loss stability limits (TLSL) of network branches, cutsets of network branches, and their relation to power flow Jacobian singularity. A minimal cutset is a grouping of system branches that—if removed from the system—separates the seller and buyer for a given transaction into two separate subsystems (islands) of the original network while containing no unnecessary branches in the grouping. It was observed that monitoring the inductive losses in the lines and cutsets can better reveal the underlying effects of approaching static collapse. We define a critical cutset as a minimal cutset of system branches that exactly reaches its own cutset TLSL (CTLSL) at the instant of power flow Jacobian singularity.

Some trends tend to be occurring before system collapse in relation to critical cutsets. These have led to the following conjectures:

Five different power system models are analyzed to experimentally support the main conjectures. Figure 41 shows the cutset inductive losses versus the cutset real power flow in a three bus system. Based on the numerical examples, there is a strong motivation to pursue a theoretical result that proves the existence of a single critical cutset that could be used to predict and quantify the boundary of existence of a load-flow solution.