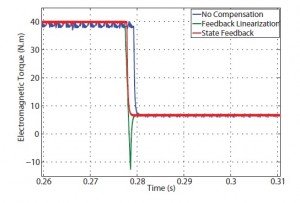 This research goal is to obtain robust and well-conditioned induction machine operation under parameter uncertainties. Direct torque control (DTC), compared to other high performance induction machine control algorithms, has the least amount of parameter dependency. However, in the past few decades practitioners have reported erratic behavior under high-speed and high-load operation. This erratic behavior is caused by the leakage factor, which exceeds the stability limit, and coupling effects between torque, speed and flux under extreme operating conditions. Several algorithms were proposed to solve this problem. The best two, feedback linearization and the state feedback method, are explained below.
Obtaining an analytical derivation of DTC using singular perturbation theory and sliding mode control provides the grounds to solve this problem. However, the stability condition of the singular perturbation theory requires the machine leakage factor to be under certain limits, available only in high performance machines. As the load and speed increase, the impact of the non-zero leakage factor introduces coupling effects between stator flux, rotor speed and electromagnetic torque. This phenomenon causes the DTC to display erratic behavior. To avoid this coupling, compensator schemes are investigated for the singularly perturbed model. 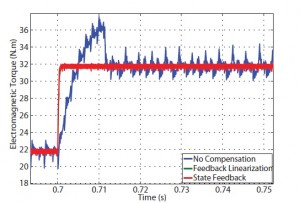 Feedback linearization guarantees decoupling but introduces parameter dependencies that result in non-robust operation under parameter uncertainties. Furthermore, high controller complexity requires expensive signal processors and increases the susceptibility to numerical calculation errors. A less complicated algorithm, the state feedback method, reduces system cost and complexity but can only guarantee partial decoupling up to certain limits. However, by choosing proper feedback gains, these limits can be set outside the induction machine’s nominal operating region.
The simulation results for both algorithms are shown in Figures 6 and 7. These compensation approaches are globally asymptotically stable and result in robust DTC operation under extreme conditions. The algorithms will be implemented in an experimental setup. It is expected that real-time results will be similar to the simulations. Using these compensation methods, a robust control method is obtained with augmented performance at high speeds and high loads. This approach creates a machine parameter-insensitive drive algorithm capable of controlling different induction machine. Possible applications are traction machines or position control with high torque capabilities.