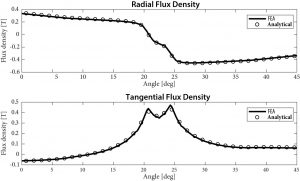 A number of emerging applications require high specific power electrical machines and drives, especially for mobile systems. Weight-sensitive applications such as aircraft motors and generators achieve this through aggressive cooling and high speed. In the adjacent field of power electronics, a major trend in recent years has been to increase switching frequency, especially with the advent of wide band-gap devices, to reduce requirements on the passive energy buffer components including inductors and capacitors. In a power-electronic fed motor drive, the electromagnetic components of the motor are analogous in some senses to the inductors, which have been minimized in the drives. 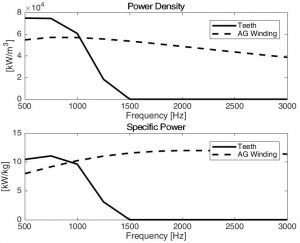 Current work takes a similar approach to explore the opportunity for improvements in electrical machines. A representative analytical model is developed to accurately compute motor performance. Figure 3 demonstrates model accuracy. Then, using appropriate approximations and high-level assumptions, a comparative study is performed to assess if some motor topologies are favored for high-speed, high-frequency designs. Preliminary findings indicate that for the permanent magnet machines, an air-gap winding topology, which eliminates teeth from the stator is favorable in high-frequency machines for high specific power, as shown in Figure 4. Future work includes adding detail and accuracy to the approximations and assumptions and inserting data points for optimized designs. This research is supported by the Grainger Center for Electric Machinery and Electromechanics and NASA.